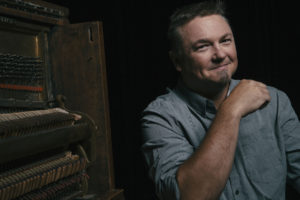 A personalized custom song written and recorded by singer/songwriters Edwin McCain and Maia Sharp is the perfect gift for the someone that has everything. If you decide to have them write a custom song for you or someone in your life, they’ll spend time with you on the phone to get a sense of who you are, your story, and get inspiration for writing the perfect song for you. It could be a song to honor a certain milestone or moment in your life, or a gift for a loved one to celebrate just how special they are. Because this endeavor takes Edwin and Maia several days to create, there is a significant fee involved, but the value of this song that is uniquely yours to keep and share is priceless.

If you’re interested, please send us an email here.

Singer and songwriter Maia Sharp has a talent for passionate, emotionally honest songs about life and love that have won her a loyal fan following as a performer as well as the ultimate show of respect from her peers — her songs have been covered by a wide variety of musicians, including Bonnie Raitt, the Dixie Chicks, Cher, Tricia Yearwood, Lisa Loeb, Terri Clark, David Wilcox and Keb’ Mo’. Maia Sharp was born in California’s Central Valley in 1971; her father, Randy Sharp, is a songwriter, producer and recording artist, while her mother, Sharon Bays, was a college professor who taught anthropology and had performed as a singer in her younger days. When Maia was four, her family moved to Los Angeles, and a year later the precocious youngster wrote her first song, “Ghosts.” Maia became proficient on a number of instruments, including keyboards, guitar, oboe, and saxophone, and later studied music theory at California State University at Northridge, where she began to explore her love of songwriting. In 1992 her father invited Maia to play horns and keyboards on That’s Another Story, an album he cut in collaboration with Karen Brooks, and by 1993 Sharp began performing her own music in Los Angeles clubs.

Sharp was discovered by Miles Copeland, who managed the Police and ran I.R.S. Records in the ’70s and ’80s, and signed Sharp to his Ark 21 label. In 1997 Sharp released her debut album, Hardly Glamour, but Ark 21 was not destined to last long in the marketplace and she didn’t cut another album until 2002, when she released the self-titled Maia Sharp for Concord Records. That same year, Sharp served as a vocalist and session musician on Everything Waits to be Noticed, a trio album with Art Garfunkel and Buddy Mondlock for EMI Manhattan Records. Buddy, Maia and the project’s producer Billy Mann were Art’s debut of turning his poems into songs. Three of Sharp’s songs would appear on Bonnie Raitt’s 2005 release Souls Alike, and Sharp was invited to sing background vocals and play sax on the sessions. Also in 2005, Sharp released her third solo album, Fine Upstanding Citizen, through Koch, produced by Brad Jones. In 2006 Sharp was back with album number four, Eve and the Red Delicious, recorded with Darren Embry, and in 2009 she released Echo, which was produced by Don Was; the album also featured a guest appearance from Bonnie Raitt.

By this time, Sharp had become more deeply involved in studio work, producing Edwin McCain’s 2011 album Mercy Bound and producing two new tracks for the 2012 release The Singer: The Very Best of Art Garfunkel. Sharp would also produce sessions for Donny Anderson, Jenifer Freebairn, and Crystal Bowersox. In 2012, Sharp joined her parents, Randy Sharp and Sharon Bays, as well as songwriter Jack Wesley Routh, for a Western-themed collaboration, Dreams of the San Joaquin; she also completed and released an album of her own, Change the Ending, released on Blix Street. In 2015, Sharp signed with Entertainment One Music and released The Dash Between the Dates, which included performances from Eurythmics founder Dave Stewart.  Her latest project, Roscoe & Etta is her self released duo with Los Angeles singer songwriter Anna Schulze.  Their debut album was met with critical acclaim and its first single “Broken Headlights” went Top Ten at Triple A radio.