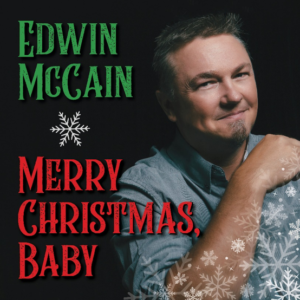 Greenville, SC (November tk, 2019) — Edwin McCain delivers some extra holiday cheer this year to his fans by surprising them with his very first Christmas album, “Merry Christmas, Baby.”  Filled with classics and favorites, “Merry Christmas, Baby” will be available on November 29, 2019 from Saguaro Road Records, a division of Time Life.

“I’ve snuck a Christmas song or two into my sets over the years, and that’s always been a lot of fun,” says McCain.  “So to be able to do an entire album is a really great feeling and I hope it helps spread a little holiday spirit around.”

On “Merry Christmas, Baby,” McCain sings heartfelt renditions of beloved songs including “The Christmas Song,” “Silent Night” and a rollicking “Jingle Bell Rock.” He even pays homage to his life on the road with “Christmas in New Orleans” and “Mele Kalikimaka.”

Called the “great American romantic” by the New York Times, Edwin McCain is the voice behind two of the most romantic songs in pop culture history, “I’ll Be” and “I Could Not Ask For More.”

McCain now performs upwards of 100 shows annually throughout the US as a solo artist, with his full band, his acoustic trio and special performances with symphonies.